This post will be for three of the Aggie Underhill mysteries by Michelle Ann Hollstein. Starting with the one I'd recommend first, especially if you are new to the series. Aggie, Betty, and Roger are a lot of fun and they are becoming a welcomed part of my life. You are guaranteed to connect with at least one of them or know someone like them, which adds to the fun. While I'm newer to the cozy mystery genre, it's easy to get sucked into Aggie's world, you've been warned 😁 (hmm kind of a creepy smiley face, huh?) Full reviews below. 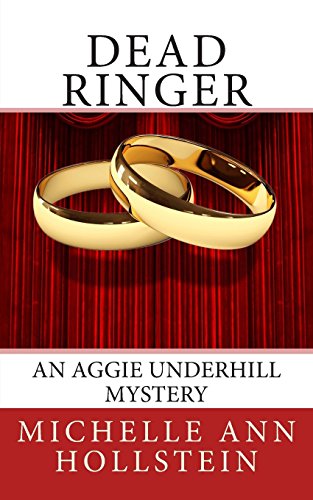 Dead Ringer (An Aggie Underhill Mystery, Book #8) by Michelle Ann Hollstein has been my favorite Aggie book so far. Would recommend venturing into the world of Aggie with this one if you are new to the series or looking for a cozy mystery.

What’s it about? While eating a donut, Roger almost chokes to death, resulting in the gang trying to solve the mystery of where the ring came from. Betty’s busy blogging away Aggie’s detective life, unbeknownst to Aggie. Roger thinks a new character is attracted to him and finds out he has started balding. Enter new characters, the game of who done it begins. There’s an appearance by Aggie’s arch nemesis, a new grandchild, and of course Tom. The book is fast-paced, contains the groups typical banter, such as does Roger almost choking on a ring causing him to become bald?

The narrator, Eliza Anders, was good. I would have no problem listening to her other books.

Overall, I recommend Dead Ringer, especially if you are new to Aggie’s world.

Parental guidance/trigger warnings: kidnapping, near death (choking on a ring that was in food), one death, slashing of care tire, posting of stories on internet blog without person’s permission, referring to someone as a slow person and using them for nefarious reasons, birth of a baby, mention of death of Aggie’s spouse and dating Tom. I do not recall any swear words- the closest there was is crap, darn. 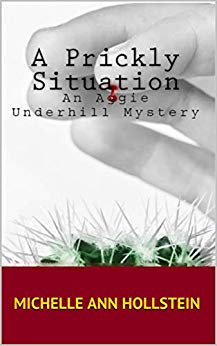 Quirky, comical mystery, yes it is!

Great story, meh to the narration…In A Prickly Situation (An Aggie Underhill Mystery, Book #6) by Michelle Hollstein, Aggie ventures into the world of online dating/social media, resulting in amusing times. The story contains multiple adventures with Betty, Roger, Tom, and new characters. This book is fast-paced and I doubt you will be bored.

At the end of each book, there is a recipe or two of Aggie’s.

The narrator, Becky Brabham, was not right for this book (in my opinion). Some of the character voices didn’t fit and it was a bummer. I don’t think she’s a bad narrator, just chose some wrong voices.
Overall, I’d recommend indulging in the Aggie Underhill series. 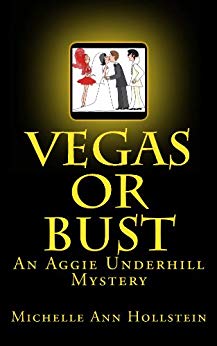 I’m digging Aggie, Betty, and Roger. I was a little worried with this one because some of the older reviews were not so good, but Aggie, Betty, and Roger have become my guilty pleasure. Vegas or Bust (An Aggie Underhill Mystery, Book #7) by Michelle Ann Hollstein was a fun cozy mystery.
Chances are great that you know someone like Aggie, Betty, and Roger, and that’s what helps to make these books fun. This is not a book that is “solve the hardcore murder mystery”- they call it a quirky comical mystery at the end of the book and I agree with that description.

Aggie, Betty, and Roger are usually brought into some mystery through no fault of their own or because Aggie is butting her nose into something. There is some bickering and banter between the three- either you get it or it’s just not your thing.

There’s a small part of me that says I should be reading/listening to these books in order because I’m missing their adventures/small things, but I had no problem catching on to the current story. The beginning of the book did have a good amount of talk about Aggie’s arch nemesis and it took a little longer than I like for the book to take off but once it did, it was fun. If you are new to Aggie’s world, I would recommend starting with one of the other books first (Dead Ringer has been my favorite so far).

The narrator, Michael Carr, was fantastic! I wish he would narrate all of Aggie’s books.

If you’re looking for a shorter, lighter mystery, I’d recommend taking a chance on this series.


*I was given a free review copy of these audio books at my request and have voluntarily left this review. Thank you for allowing me to listen and review the book!

And now where to find everybody...

Eliza Anders
Michael Carr (Hopefully this is the correct website- no specifics listed for books)
The website I found for Becky Brabham has expired unfortunately so I will not be listing it.