Dick Cheney Shot Me in the Face and Other Stories of Men in Pain by Timothy O’Leary, narrated by David Bosco 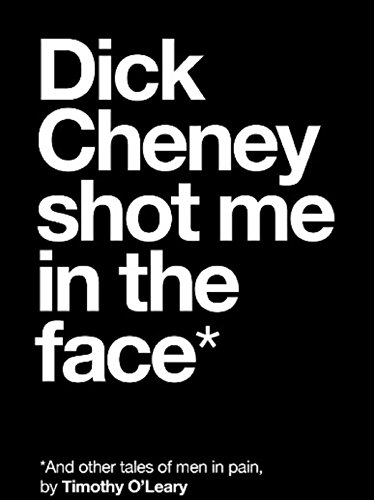 Dick Cheney Shot Me in the Face and Other Stories of Men in Pain by Timothy O’Leary, narrated by David Bosco, is a series of short stories revolving around men and what’s happening in their life at that particular time. It contains adult themes. If you are a fan of short stories, thought-provoking stories, or just looking for something different, give this book a listen. I highly doubt you’ll be disappointed.

Each chapter is a different story with various lengths (see list below for details). I had no problems with the transitions as you hear the title of the story (I could see how if you’re not paying attention it might be missed). There were a few I wish were just a tad bit longer, but it is what it is. I listened to a couple of stories a day and enjoyed them immensely. The stories were intriguing enough that several of my family members asked what I was listening to.

This is my second audio book by narrator, David Bosco, and he was once again awesome! He certainly adds to the feel of the stories. His voices for the different characters are marvelous. David is one of two narrators I’m watching to see what they do next. My advice is to listen to his books because if you haven’t, you’re missing out. Seriously.

Some things to expect/thoughts that came about as I listened: Laughter, feeling for these people or disliking them, some of the stories will leave you wondering, how our past play into our current and future life, how we deal with what comes our way (whether the outcome is good or bad depends on the person), and underlying/revolving themes- how your actions affect others/how we are more like one another than we realize or want to admit at times/what’s right or what’s wrong/who is right and who is wrong when we have a difference of opinions or beliefs/bad habits are hard to break.

One of my favorite quotes from the book is “expect the unexpected because things are not always as they appear”.

~A brief description of the stories~

1) “Dick Cheney Shot Me In the Face”- pretty much what the title of the chapter says. Approx. 21 minutes.
2) “First Kill”- A teenager is taken on a hunting trip with his father. The two do not share the same views on life. Approx. 29 minutes.
3) “Fake Girlfriend”- A guy creates a fake girlfriend online and things don’t go as planned. Approx. 41 minutes.
4) “One Star”- A not-so-bright couple leaves a review on an immigrant family struggling to run a restaurant. Approx. 41 minutes.
5) “The Tower”- A man’s wife dies in a car accident and he learns something about her after her death. Approx. 16 minutes.
6) “Hecklers”- A washed-up actor turned offensive comedian. Approx. 25 minutes.
7) “Regarding Your Ex-wife”- Two guys talking about an ex-wife. Approx. 8 minutes.
8) “Impala”- Two brother’s are abducted by a child molester. One ends up in the same prison as the child molester. Approx. 18 minutes.
9) “Jesus Knocking”- A guy goes to a not so typical church and meets people he didn’t think he’d ever hang out with. Approx. 43 minutes.
10) “The Big Chocolate Whistle”- A substance abuser causes a ruckus on a flight resulting in numerous fallout's. Approx. 21 minutes.
11) “The Purification”- A severely abused boy shows up at a sheriff’s house requesting help. Approx. 42 minutes.
12) “Midnight Elvis”- A son discovers something fun about his father. Approx. 6 minutes.
13) “Costco Girl”- A guy sees a girl from his past at Costco and learns several things he wasn’t aware of. Approx. 18 minutes.
14) “Everyone Loves Meatloaf”- A guy’s midlife crisis. Approx. 4 minutes.
15) “Bouncing”- A former Marine works in Las Vegas as a bouncer and is hired to protect a wealthy geek. Approx. 22 minutes.
16) “Adolph’s Return”- A tale of Adolph Hitler being reincarnated as a cow. Approx. 8 minutes.
17) “Homeless Gary Busey”- A man is bullied and harassed by a mentally unstable homeless man who happens to look like Gary Busey. Approx. 45 minutes.
18) “A Letter to the Governor”- An inmate pens a letter to the governor claiming his innocence. Approx. 8 minutes.

Parental guidance/trigger warnings: Make no mistake, these stories are for adults and for adults who can handle tough subjects/swearing/reality of life and what it can bring. The warnings below may give some spoilers away. You’ve been warned...
…..
...
.
Abusive father to wife and son, swearing throughout (I don’t recall a story that didn’t contain at least one but I could be wrong on a couple of the shorter ones), shooting a person, drinking mentioned in multiple stories, hunting, camping, talking about sex in multiple stories, pressures to “be a man”, pressures of society on marriage and having children, internet dating/social media, bad credit issues, smoking cannabis in a couple stories, wife dies in a car accident from another driver texting, a large amount of slurs and self-deprecation in story six, addiction to pills/alcohol/other drugs, out of control shopping due to drug use, Bill Cosby mentioned once, a child molester kidnaps two brother/kills one/the living brother struggles through life after the kidnapping/rescue, prison in a couple of the stories, religion, cannabis grower, family problems, a father’s death, drinking beer with pastor, sick mother, racism, stealing, lying, multiple stories have characters hitting rock bottom when they think they have it figured out only to fail again, a father who is abusive to his son after his wife dies, murder of abuser, cancer, back injury due to falling off horse, STD mentioned as a joke, death from knife, Adolph Hitler and Heinrich are the MC’s in one of the stories, threats, bullying, PTSD, homelessness, several stories mention serving in the military/war, physically assaulted, dog is poisoned and dies, and mentions of prison conditions. Slurs- many throughout the book but not in every story. Some examples of what are used are: red#*in, camel j*#key, tr@*$vestite, fa**ot, m!*get, and probably a lot more I forgot to write down.

Where to find the author: Timothy O'Leary

Where to find the narrator: David Bosco
Posted by Printed & Bound at 10:36 AM

Email ThisBlogThis!Share to TwitterShare to FacebookShare to Pinterest
Labels: Adult Series, David Bosco, Dick Cheney Shot Me in the Face and Other Stories of Men in Pain, Short Story, Timothy O'Leary