Bridgeworld, Volume 1 by Travis McBee and narrated by KC Johnston

Bridgeworld, Volume 1 by Travis McBee and narrated by KC Johnston is a fun, easy listen aimed for teens. Would recommend for those in middle school. (full review below) 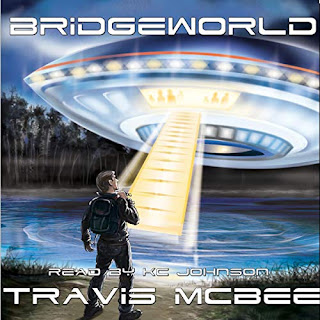 Bridgeworld, Volume 1 by Travis McBee and narrated by KC Johnston, is a good listen and step into Sci-Fi for the younger folks. Despite being well past my teen years, I enjoyed this listen and wish this would have been around when I was growing up. I would recommend this book to teens in middle school.

What’s it about? A teen finds out he isn’t from Earth and ends up entering Bridgeworld Academy. It contains the typical teenage problems- relationships, sports, fitting in, jealousy, clothing, prom, birthdays, and like stuff. And if the summary, book cover, or my review didn’t make it clear- Outer space. Would like to note the book is rather descriptive (a good thing). There are underlying themes throughout (acceptance being one).

The narrator, KC Johnston, was once again fantastic! This is his second book (or so I believe it is) and he helps make the book what it is. KC is one of two narrators I’m following to see where they go. He has a steady, soothing voice. Would recommend giving him a listen.

Would I recommend? Yes. Would I listen to the next in the series? Yes, while it’s made for a younger audience, I find KC’s narrations are a must listen.

Parental advisory/trigger warnings: Overall it is a fairly clean book- beware spoilers are kept to a minimum here….stop now if you do not want any...
…..
...
.
I do not recall any swearing. Kisses between boyfriend and girlfriend multiple times (not described in detail). One boy attacks another during a game, but the attacker get his arm broken. Relationships between boyfriends and girlfriends (very PG from what I recall). Aliens, adults drinking alcohol, competition between two schools & the one school has a history of pranks gone wrong. Bathroom bullying by two girls from the other school at sports game. Bullying throughout the book between students. Kidnapping. One student gets kicked when he is unconscious (he is knocked out first) by another student.

*I won a copy of this book. Probably don’t need to write this but here it is.