Death Becomes Us by Pamela Skjolsvik and narrated by Lisaun Whittingham

Death Becomes Us by Pamela Skjolsvik and narrated by Lisaun Whittingham, is a thought-provoking listen through the subject of death and life. Highly recommend for everyone regardless of your comfort with the subject. It kept my interest the entire time. (Full review below) 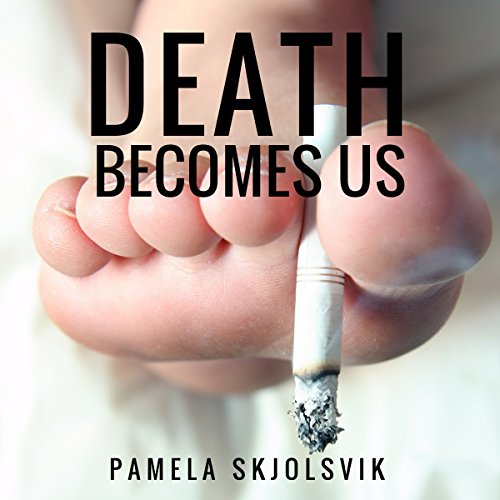 Where to find the author: Pamela Skjolsvik

Where to find the narrator: Lisaun Whittingham

Death Becomes Us by Pamela Skjolsvik and narrated by Lisaun Whittingham, is a thought-provoking listen through the subject of death and the elements that surround it, including life. Highly recommend for everyone regardless of your comfort with the subject.

The summary does a good job at touching the surface, yet there is so much more to this book. Other things to expect: How the author came upon the idea for the book, price of funerals/cremation, humor/sarcasm at times, death photography, how death affected her hairdresser, pet death, bio-hazard cleaning, EMT interview, the different ways we grieve, why celebrity death can make a big impact on someone despite no personal relationship with the celebrity, talking with a medium who talks to the deceased, writing letters and talking in person with a death row inmate, a hotel murder in Baltimore, cremation, hospice work, interview with a former prison warden, interview with a chaplain who is with the death row inmates when they die, and an interview with mortician.

Lisaun Whittingham, the narrator, was a pleasant surprise. I would listen to another of her books no problem. There was one mispronunciation with the word pertussis (maybe it’s a regional thing?).

What I wish had more detail/or would change: Dr. Huser talking more in depth about feelings and dealing with death on a daily basis. There was a couple times towards the beginning of the book where the author was a bit captious of others she met (didn’t ruin the book and it became less as the book progresses, but wanted to note in case you are listening and are wondering if you should stop listening- I’m here to tell you to continue because it is a fantastic book overall).

Thoughts that came about during my listening of the book (the extremely condensed version): death affects us all, it’s part of the life cycle, death changes us, we continue our bad habits knowing they can lead to an early death, how important closure is, what is proper etiquette with death, even though everyone experiences death at multiple times in their life it doesn’t make it any easier when it happens, we have to go through the emotions or problems can arise from holding it in, if you experience multiple deaths (for people/pets) each year or for consecutive years how does that affect you vs. experiencing a death once every 10 years, how you feel when it’s a sudden loss vs. an expected loss, everyone has a death that stays with them more than others (is it because it’s traumatic, someone you were especially close to, or something else?), Innocence Project (is death row OK? What if it was you or one of your loved ones who is later found innocent? If someone has a mental illness, such as Schizophrenia, should they be on death row?), the author’s family is a typical family, how age changes your views on death, do death row inmates turn to God because there is nothing left for them, why it’s important to make your wishes known on paper (having a will and what you want/don’t want for a funeral), how did the veterinarian miss the fleas, PETA- wow and shame on you, and those of us that work in fields where death happens- we don’t lose feelings, but have to keep a small distance for our own sanity/well-being.

Overall I would recommend and would easily listen to a follow up book by Pamela.

Parental guidance/trigger warnings: Death (duh!), anxiety/panic attack talk/experiences throughout the book, therapy, Woody Allen quote, Michael Jackson’s death, body image talk (weight gain/aging), dissecting fetal pig in science class, breast feeding, death right after birth, multiple miscarriages and the struggles involved, child death, unprofessional medical employees, talk of thyroid cancer, murder of family by the father in a hotel, suicide (the father in a hotel, three attempts in prison in detail), mention of an affair (literally a mention), animal death, birth of child, and some talk of God/religion but not preachy/minimal. Words: Bitch x1, hell x1. I do not recall any other swearing, but possible I missed it.

A couple of personal thoughts~
I received a copy of the book, started listening to it, experienced the sudden death of my cat the next day. I wasn’t sure how long it would be before I picked up the book again, but did so a couple days later. I found there is a certain amount of comfort with this book. Despite the difficult subject matter, it also helps to weed out your feelings on the subject.