The Fat Man Gets Out of Bed (Collected Short Stories) by Michael Lynes and narrated by David Bosco is a fantastic set of short stories ranging from Sci-Fi to realistic life situations. If it's been a while since you've listened to short stories, or forgotten how great they can be (like me), or are looking for something new, I recommend you give these a try. (Full review below) 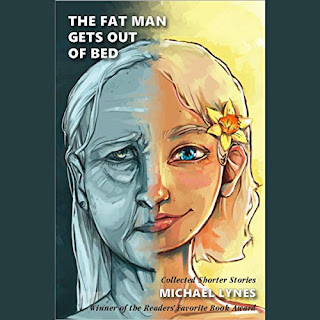 Where to find the author: Michael Lynes

The Fat Man Gets Out of Bed (Collected Short Stories) by Michael Lynes and narrated by David Bosco are a fantastic set of short stories ranging from Sci-Fi to realistic stories on grieving/death.. If short stories aren’t your typical listen/read, or perhaps forgotten how great they can be (like me), I recommend you give this book a try. Michael and David make a fabulous team.

It’s difficult to pick a favorite as they are each unique, but if I had to choose, it would be “The End...All Things Considered”. If you are going to listen to one, make sure it’s this one. The humor and story is rather amusing.

The narrator, David Bosco, did an outstanding job. You really get a sense of his voice ranges. Highly recommend giving his books a listen.

The descriptions on the stories are beautiful and engaging. Some may break your heart and have you thinking long afterwards, while some may have you laughing and thinking what if. Death and Sci-Fi elements are common themes. There are occasional but minimal sound effects used for certain stories (aliens, Gods).

Some things I thought about during the listen: The circle of life, how memories can be/bring you back to the time or place, that blood doesn’t necessarily mean family. My favorite quote from the book is “Only those who once live may truly die.”

Overall I recommend, especially if you enjoy Sci-Fi, short stories, or are looking to expand out of your normal comfort zone.


*I was given a free review copy of the audiobook at my request and have voluntarily left this review. Thank you for allowing me to listen and review the book!
Posted by Printed & Bound at 9:37 AM

Email ThisBlogThis!Share to TwitterShare to FacebookShare to Pinterest
Labels: David Bosco, Michael Lynes, The Fat Man Gets Out of Bed (Collected Short Stories)