Superman Unveiled (A Novel) by Luis Herrera and narrated by David Bosco is a book I’m having mixed feeling on, but I did enjoy the story overall and would recommend if you are looking for a unique story that contains a good amount of religious elements as it moves forward. Full review below. 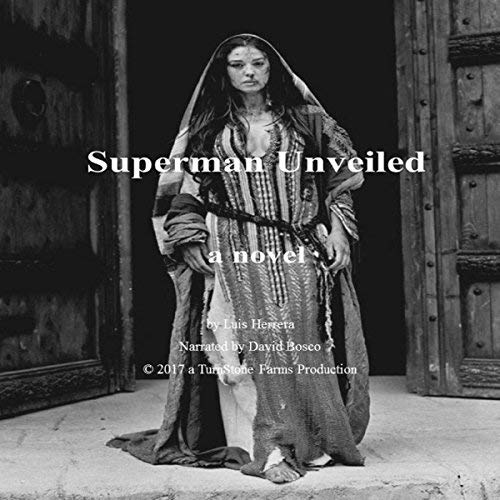 Superman Unveiled (A Novel) by Luis Herrera and narrated by David Bosco is a book I’m having mixed feeling on. Luis has a way with his writing that pulls me in and his stories are different (in a good way), but with this one, the preaching became too much for my personal taste from chapters 14-17 (it did let up after this).  I did enjoy the story overall and would recommend.

So what’s it about? Think of it as an adult retelling of Superman, or a Superman of sorts- it begins with a tale of Superman and changes over to more of a religious theme by the end. You will need to put anything you know about Superman aside because it’s not the typical superhero legend you know. With that being said, you will hear some references to Clark Kent, Christopher Reeves, or like mentions. There is some humor. Multiple times in the first couple chapters I was laughing and well, just the thought of our beloved superhero being not so good…make sure to open your mind with this and you will enjoy it/understand it better. Some other things to expect/explore: the many lives lived by this Superman/Magnus, immortality, Mary Magdalene, the story taking off in the 80s/90s Pablo drug era and moving into the future of New Freeland, twists and turns, and more.

David Bosco, the narrator, did a brilliant job (as usual). He has a nice variety of voices and keeps a steady pace, definitely adding to the story. If you haven’t checked out David’s books, you should get on it (like now).

If you’re down to listen to a unique story that contains a good amount of religious themes as it moves forward, you will enjoy this one. Overall I give it four stars for the story, five stars for narration.

Parental advisory/trigger warnings: The first part of the book contains adults situations, such as swearing, mention of blow, parties & hookers, car accident, drug smuggling, slurs (n and f word), discussing of social injustices, and heavy on the religion as the book moves on.