The Loudest Silence: A Post-Apocalyptic Zombie Novel (Oklahoma Wastelands, Book 1) by Kate L. Mary and narrated by Heather Firth is another great zompoc tale! Looking forward to where the characters go/story progresses. Loved the added bonus novelette at the end. Full review below... 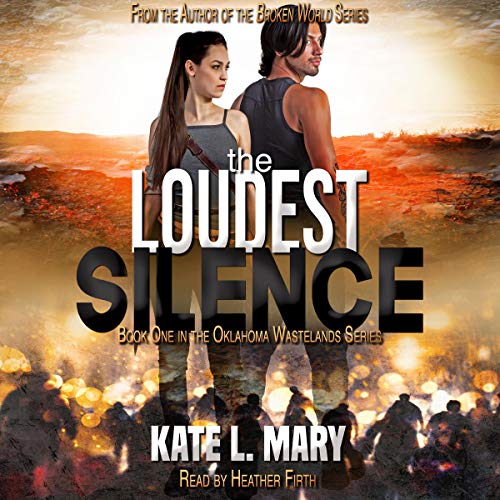 The Loudest Silence: A Post-Apocalyptic Zombie Novel (Oklahoma Wastelands, Book 1) by Kate L. Mary and narrated by Heather Firth is an amazing zompoc adventure! I recommend if you enjoy stories with great world building/great characters, the zompoc genre, or looking for something new, give this one a try.

What’s it about? Regan and Kellan have been living underground with a small group of folks since the zombie apocalypse began. Regan, who’s been treated as the baby of the group, is now an adult and requests to learn how to survive on her own (killing zombies, going to trade with others, etc.). She has also realized she cares for Kellan. Harper, a lone teenage girl who happens to be immune to the virus, shows up at the group’s hidden bunker one day. They decide to let her in and the troubles begin...It does end in a cliffhanger, or semi-cliffhanger- it’s clear there is more books in the series. The way people were talking in reviews I was expecting way more romance, but I didn’t think there was any more than in previous books I’ve listened to of Kate’s (I felt there were more zombie elements than romance). Favorite quote from the book: “Life isn’t worth living if there’s no risk.”

The narrator, Heather Firth, did an excellent job. Her voices are distinct and her narrating is smooth and easy to listen to.

You also get a bonus called Thank You Daddy (Broken Stories Novelette). It is fantastic! It tells Emma and Blake’s story at the beginning of the apocalypse. I am hoping we get more of their story (hint hint Kate).

Overall I recommend, especially if you love stories with great world building, fun characters, or the zompoc genre. Kate has yet to disappoint me with her writing and she’s in my top three favorite authors of 2019. If you haven’t jumped on the Kate bandwagon, it’s time to do so.

Parental guidance/trigger warnings (for both The Loudest Silence and Thank You Daddy): drinking, death (zombies, people), kidnapping, occasional swearing, weapons (guns), shower between the two main characters followed by sex (not in graphic detail), some sex talk (being a virgin, learning about it, or like things- minimal), threat of/sexual assault (forced removal of clothing on a woman before it is stopped- indicated she would be raped but stops before rape occurs), execution of male with gun, hitting of male in head with bat, war talk (Iraq/Afghanistan- not in detail a mention of past service), death of parents.
Where to find the author: Kate L. Mary
Where to find the narrator: Heather Firth
Posted by Printed & Bound at 1:30 AM