Holy $*&!- need I say more? Team Mike, Emma, Lucy, and Humphrey all the way! Safe Haven -Realm of the Raiders (Book 2 of the Post-Apocalyptic Zombie Horror Series) by Christopher Artinian and narrated by Kim Bretton is a series all zombie fans should be listening to... 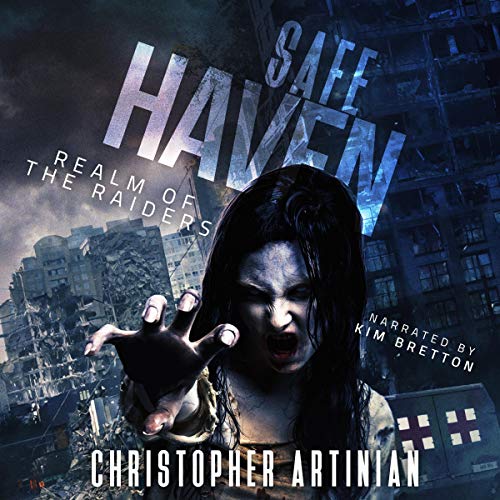 
Safe Haven -Realm of the Raiders (Book 2 of the Post-Apocalyptic Zombie Horror Series) by Christopher Artinian and narrated by Kim Bretton is a fast-paced, on the edge of your seat, wild ride through the apocalypse! Would recommend this series if you enjoy fast-paced zombie action with a great story behind it.

This is yet another series by Christopher I can envision happening...it’s easy to listen to and get sucked in (you’d be best to clear your schedule before you begin listening to both of his Safe Haven series if you know what’s good for you).

What’s it about? Mike and his entourage are settling into their new location, but it’s not long before it’s under attack and things get complicated. You get zombies (descriptions are excellent), action, blood and gore, betrayal, love, family, bad guys, losses and gains, weapons, character growth, killer rats, and more. The minor characters add to the story all in a good way, especially Humphrey (the dog). Nice to see characters from The End of Everything make an appearance. My only gripe (it’s hard to even write this) is I’d like to see the children get on board- they’ve been through a lot in a small amount of time, time for them to get on the zombie killing board or…

The narrator, Kim Bretton, did a marvelous job. She brings the characters to life and is easy to listen to.

Overall, I highly recommend, especially if you are a zombie fan. You can’t go wrong with either of his Safe Haven series.

Parental guidance/trigger warnings: this is a dark zompoc book- swearing, suicide of a woman and her daughter, guy treats dead body violently, mention of a suicide pact, violence, weapons, women are forced into sex work, death, Afghanistan mention, and probably more things I’m forgetting (it’s easy to get into the book and forget to write info down).