The Devoured by Curtis M. Lawson and narrated by Jason Sprenger

Fantastically dark all around...The Devoured by Curtis M. Lawson and narrated by Jason Sprenger is a unique dark fantasy that kept my interest and left me wanting more. I highly recommend if dark fantasy is your thing. 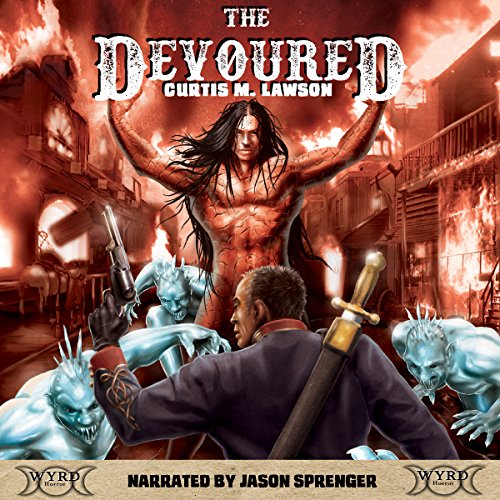 
What’s it about? The summary tells it well and if that peaks your interest, you should def be listening. Emmett’s mother is sick and he searches for a cure which leads him to his shaman grandfather in the Paiute tribe. Emmett’s world changes forever after this meeting. Meanwhile the old man (Emmett’s father) is searching for his son to rescue him from the Gods of Utgard. The old man gets a tag along named Hank. You get trolls, magic, witches, the undead, cannibals, and other creatures. The story alternates between Emmett and his father (the old man) and occasionally Hank. The story flowed nicely and the narration is smooth.

The narrator, Jason Sprenger, was a perfect fit for this book. He brought a real feel to the Old West world. Voice is smooth and easy-to-listen to.

“Across the tracks from where they stood the church’s giant wooden cross loomed like a symbol of Roman terror, rather than an icon of human hope.”

“Naked, hurt, and dehydrated, he reached up above the door and grabbed the effigy of Christ off the wall. He looked at it with anger, wondering how many other myths and ideologies the Devourers hid behind. Then, almost as an afterthought, he tossed the crucifix into the fire, letting the idol burn along with its servant.”

“Hank let another slug fly, and spilled the blood of a third witch, like a splash of whiskey for a dead friend.”

Parental guidance/trigger warnings: This is a dark fantasy, it’s not sunshine and rainbows or puppies and kittens. Some of the elements are: sex (not long or in much detail), death, weapons (guns, knives). Language used: r**skin x3, savage x1, f x4, s x17, n x3.

*I was given a free review copy of the audiobook at my request and have voluntarily left this review. Thank you for allowing me to listen and review the book!
Posted by Printed & Bound at 12:11 PM No comments:

There’s something about Mary...Villains and Vixens (The J.R. Finn Sailing Mystery Series, Book 5) by Charles Dougherty and narrated by David Bosco is another fantastic addition to the series. Recommend if you’ve been following the series or looking to start a new one (make sure to start from the beginning). 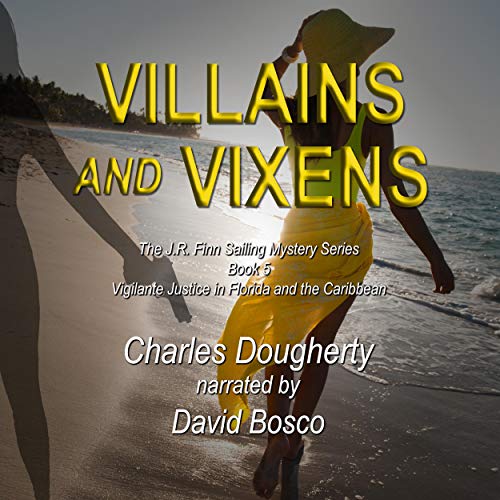 
What’s it about? The book starts a while after the previous events with something amiss about Mary. Finn is set to figure out if he should off her or keep her on the team. Finn encounters some problems of his own in the form of a femme fatale assassin. You get old characters coming into play, along with some new ones which really helped make this book fun and a good amount of action. There is a decent amount of strategy throughout, giving you a glimpse into their thinking, along with sailing terminology (don’t worry, it’s easy to understand and pick up). This is one of my favs of the series.


The narrator, David Bosco, did an incredible job yet again. I loved the character voices this time around- nice variety and you get a real sense of what he can do.

Overall I recommend, especially if you’ve been following the series.

Parental guidance/trigger warnings: The two MC’s are assassins, so you get death, torture, weapons, and this one has some fairly detailed killing.


*I was given a free review copy of the audiobook at my request and have voluntarily left this review. Thank you for allowing me to listen and review the book!