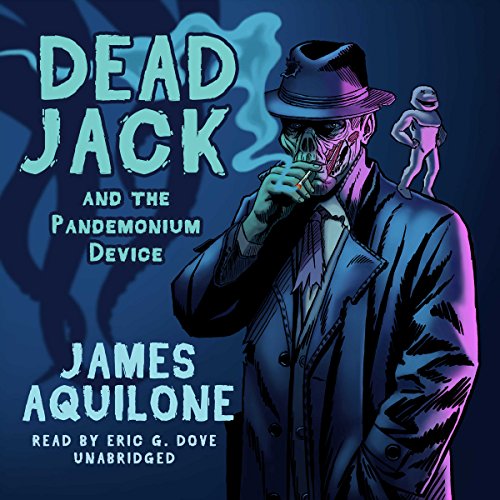 What’s it about? Jack is a zombie private investigator who happens to be addicted to fairy dust because it’s the only thing that controls his zombie appetite- better than alternatives, right? He has a side kick of sorts named Oswald. Together they set out to solve the goblins missing cat problem and discover a more sinister plan is in play. You’re taken into Jack’s world where there are ghosts, kraken, ghost pirates, shark women, goblins, leprechauns, demons, entertaining dialogue between Jack and Oswald, and so much more. You get a little of almost everything in this book and it makes for an odd, humorous listen. 4 ½ stars for story, 5 stars for narration.

The narrator, Eric G. Dove, did a wonderful job. Nails the characters and script perfectly.

Overall I recommend, especially if you enjoy dead, odd humor. I’m not sure how anyone could not like this book, but one thing is for certain, I need more Dead Jack on audible!

~ Thank you, Oswald! Ever since I hooked up with that damn homunculus I’ve had nothing but misery and annoyance. “You’re taking to much dust, Jack.” “You’re not a zombie if you don’t act like one, Jack. Don’t eat that fairy Jack.”

~ The little monster looked dumber than a bag of warm centaur sh**.

~ A thief with morals. I admire that. You must know other infernal thieves, though. Maybe there’s someone you know who likes kitty cats? Someone with a whisker fetish?

~ I’ve never liked ghosts, even if they call themselves spectral buccaneers. You can’t trust them. They always have some gripe or mission or obsession. ShadowShade is full of spirits, hence the name, so I know of what I speak. My secretary, Lilith, is a ghost. She’s always going on about being hammered to death. Let it go, honey. It happened centuries ago.