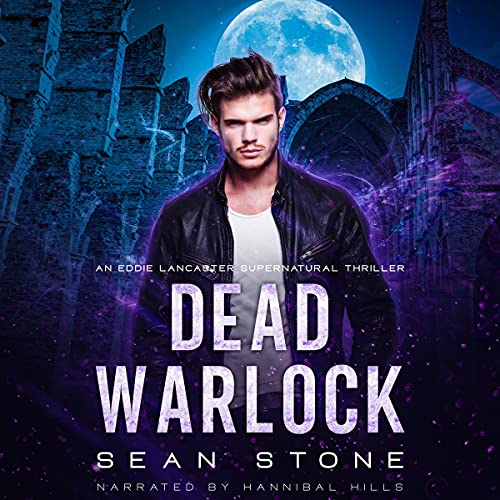 Dead Warlock (Arcane Inc., Book 5) by Sean Stone and narrated by Hannibal Hills is one I didn’t want to put down or end. I listened straight through and wish wish wish the final book was on audible but it's not yet, so I will quietly await it's release. If you enjoy fantasy with dark and magical undertones, this series is for you. Eddie's story has become one of my favs over the past year, if not my number one.

It’s going to be difficult to write this review without spoilers as a lot happens, so here’s what I have for you: Eddie’s world becomes utter chaos- it’s full of unpredictable, intense, fast-paced action that all leads up to an epic ending. It doesn’t disappoint. The character and plot development are fantastic and get better with each book.

The narrator, Hannibal Hills, did a good job bringing Eddie to life. He nails the tones perfectly. Pace is good. Easy to listen to.

Parental guidance/trigger warnings: This is a darker urban fantasy- expect things like death, violence, and not rainbows and unicorns. Language used: Fx41, Sx20

Where to find the author: Sean Stone

Where to find the narrator: Hannibal Hills

Time for Blood (The Blood Series, Book 3) by: Michael Lynes and narrated by David Bosco

Time for Blood (The Blood Series, Book 3) by: Michael Lynes and narrated by David Bosco is an excellent ending for the series. Highly recommend whether you’ve been following it or are new to it and looking for mythology mixed with fantasy. It will keep you interested, isn’t your run-of-the-mill tale, and the narration is marvelous. Did I mention David is one of my fav narrators out there? 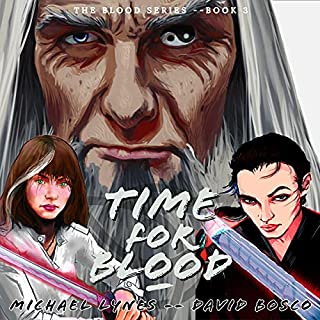 Where to purchase:
Audible

What's it about? Dev, Tray, and the others are back as the battle continues. The action starts from the get-go with the undead army and continues to the end. It’s unpredictable, has some laughs, and is fairly fast-paced. Without saying spoilers, there’s an epic decision for one. There are some added sound effects (ex. echos) for some of the characters, which fit for the story and are not excessive or distracting.

The narrator, David Bosco, helps to make this series stand out with his first-rate narration. The characters are distinct, pace is perfect, and it’s a pleasant listening experience.

I recommend and wish more people knew about this series as it’s fantastic all around. The author and narrator make a great team.

“Is that all you’ve got?” I let a judicious tone enter my voice. “Looks like you’ve lost a klick or two off your fastball there, Typho. But, hey! Don’t let it get you down, it could happen to anyone! I’d say a touch of performance-anxiety. Projectile dysfunction, maybe? I hear they’ve got this pill- but I digress”.

“Without choice, there could be no world.”

Where to find the author: Michael Lynes

Christopher and Kim have done it again with Safe Haven- Neverland (Part 1). I keep waiting to be disappointed in the series but it just hasn't happened yet. This book was a tad different in regards to the action came later. If you haven't tried one of Christopher's zombies series and you're a zombie fan, you absolutely should be doing it ASAP. I'm waiting for his world to be developed into a TV show or movie. Full review below... Safe Haven- Neverland (Part 1) Book 7 of The Post-Apocalyptic Zombie Horror Series by Christopher Artinian and narrated by Kim Bretton is another good one for the series. This one has a little bit of family, hopes, and battles. And zombies of course. If you are following the series, you definitely need to listen to this one as it’s still great this far in! If you are new to Christopher’s books, make sure you start from the beginning or you’re missing out. You get invested in the characters- it’s impossible not to. It’s easy to listen to the books in one sitting. 4 ½ stars for story, 5 stars narration.

What’s it about? Part of the group is stuck and surrounded by zombies as a new threat emerges, while the other part of the group is fighting their own battles. We get a good amount of Mike in this book (his memories, he gets his hopes up, etc.), but a variety of the others as well. There are some defining moments. Without giving too much away, the group gears up for what I’m guessing will be an epic battle in the next book. Love the banter between Mike and Jules. Love the characters and their development. My only dislike was the action occurs a little later than normal, but it’s a good build up. There’s a bonus preview at the end of Christopher’s new post-apocalyptic series The Burning Tree with Kim narrating (wow Kim, great singing!).

The narrator, Kim Bretton, is brilliant. Love the accents and characters. Kim’s narration adds to the story.

Where to find the author: Christopher Artinian

Where to find the narrator: Kim Bretton